Throwback Thursday!  This time it’s one of my older on-location cosplay shoots (quite possibly one of the first), featuring the amazing Abra as Luna Lovegood from the Harry Potter series!  This shoot takes me back to when I was still discovering off camera lighting.  I found out that my 7D could set off speedlights and then I about flipped.  I was trying to shoot everything with off camera lighting.  Bare off camera lighting.  Clearly I didn’t really know what I was doing yet, but we did it in the name of science.  I’m going to step back and re-edit my old photos and see what turns out. :] 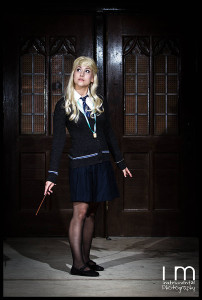 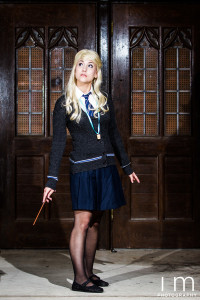 I had run into Abra at MetroCon 2011 a week or two before the shoot and suggested we do a shoot around UF’s campus since I was trying to learn more about lighting and photography.  She was kind enough to get into her Luna Lovegood cosplay to match the brick architecture of the University of Florida. This is still one of my favorite shoots.

Much has changed in 2 years. Clearly my editing as has adjusted since then.  I was very heavy handed in terms of my contrast and clarity.  Darks were very dark, edges were very sharp, and colors were loud and clear.  Subtlety is more the norm for me now.  Softer lights are also more normal now, but I didn’t know what I was doing back then.  Abra’s a great cosplayer and her Luna is perfect.

It’s always amazing to go back and see what you skipped before.  There are shots in this set that I didn’t edit in 2011 that I look at today and say “Why didn’t I edit these?”

This shoot was also a bit of exploring for me.  I rarely get to see the campus in the middle of the night.  UF is more than a century and a half old.  Though some of the buildings on the campus have been through some extensive renovations, there are remnants of old architectural thinking contained within the newness.  We found this little tunnel leading away from a courtyard blocked on one side by a gate. Pitch black. We decided that it might be a good place to look like you were sneaking through a tunnel at Hogwarts, so I set up a couple of flashes and tried to get a decent shot.

This is my favorite shot in the whole series. Very slight changes between the two edits.  My old edit is always darker and has more clarity.  The new photo has a wider crop and more light in the shadows.  You can see that I popped two bare flashes in this shot looking at all the shadows and such.  I’m surprised it came out at all considering how dark it was in that little tunnel.  I would love to see what I can do with this shot with my current skill level and equipment.  This is my favorite shot in the whole set. :]

Photography, in general, is about growth and experience.  Very few come out of the gate shooting like a professional, and my old photos are proof of that.  I’m so very thankful for the experiences and people I have worked with.  Never stop learning. :]

Well, thanks for stopping by for another Throwback Thursday!  Tune in the week after next to see the next one!