Dragon Con 2013.  Two weeks ago, I finally made it back to Atlanta for Dragon Con once again after a year hiatus from going.  In 2012, I definitely saw all the  pictures and the times people had and man was I envious.  I vowed at that point that I would not miss Dragon Con again.  Unsure of our hotel situation a couple weeks back, we weren’t sure we were going to make it, but thankfully Betsy and Sarah are a couple of great friends and offered us a place to stay at the Westin!

Dragon Con is a multigenre convention held annually in Atlanta, GA since 1987.  This year’s attendance was huge, hitting about 57,000 con-goers!  The convention spans 5 hotels and even more common areas such as the Peachtree Center and the Atlanta America’s Mart Convention Center.   The convention draws a thousands of people from all over the country as far as California, and even brings in people from other countries.  And it’s not all about the panels and celebrities; Dragon Con is a veritable celebration of all things nerdy and geeky, to put it lightly.  Events, parties, and raves usually end up running into the early morning hours.

As far as meeting people and hanging out, this is the convention to go to.  As far as photography goes, it’s a bit of a challenge to say the very least. Finding wide open spaces and nice scenery is not an option unless you leave the convention area.  I didn’t plan any official shoots for this convention for these reasons so much of my photos are contained on spaces on the 10th floor of the Marriott Marquis.  That’s not to say I didn’t get to photograph some amazing cosplay.  Dragon Con is definitely a cosplayer’s convention.  Atlanta is rife with artisans, costumers, and propmakers, and they all bring their ‘A’ game to the convention.

Shooting cosplay at Dragon Con consists of finding a nice clean space with a nice clean background and getting your light correct.  Gladly, it’s something I have gotten used to shooting in a photobooth for a series of convention at the beginning of the year.  I found this little empty corner behind a bank of escalators at the Hilton (seen above). 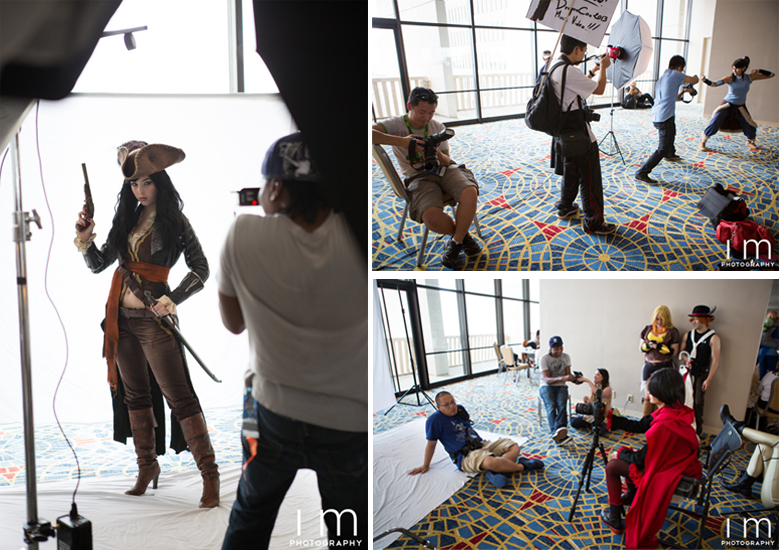 Most of the time I spent shooting and hanging out was on the 10th floor of the Marriott Marquis, the central hub of celebrities and nightlife for Dragon Con.  Many other photographers use the 10th floor as free space to shoot cosplayers since foot traffic is much lower, and it’s ‘easily’ accessible.  It’s beginning to be more common for cosplayers to come to the 10th floor to meet up with photographers for a couple shots. Kay of Elysiam Entertainment was fully set up in one of the cubbies on the 10th along with SGH Photo Art and other roaming photographers and videographers like Davin, Ackson, and Minhnhat.  I had the privilege of meeting other photographers and videographers such as Joe Chi Lin, Jason, Benny Lee, Jon, and MLZ along with many cosplayers like Meagan Marie, The Lady Nerd, and Sushi Monster. :]

Shooting the 10th floor is a little complicated considering the amount of photographers, videographers, and cosplayers walking about.  Although the traffic is not nearly as high as the lobby, it’s still of some concern.  No one wants to be that person blocking traffic. We decided on using a not oft used spiral stairwell as a background for a few shots. For me, Dragon Con is more about capturing the cosplay and cosplayers rather than working on getting a full flushed out shot in a proper environment / background.

When in doubt, use a wall.  I don’t mind shooting against walls.  It brings focus fully on the cosplayer and costume.
Seen above are Meagan Marie, Miss Sinister, and Fushichō Cosplay.

After hours, I don’t have much in terms of content.  I stashed away my camera after I was done shooting for the day and just took time to hang out and talk at night.  As I mentioned before, Dragon Con is a celebration.  We took the time to relax and enjoy company.    :]

(OK, maybe I carried around a camera one of the nights.)

Had an amazing time at Dragon Con and I can’t wait to be there for 2014!  Gallery follows!